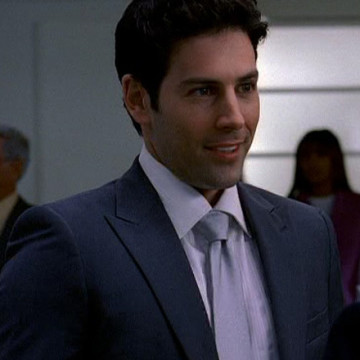 Adam: I got you an audition for a guest-starring role in a pilot. A pilot that's all but on the air.
Drama: Yeah? What's it called?
Adam: CSI: Minneapolis. Don Johnson playing the William Peterson playing the David Caruso playing the Gary Sinise role.

Drama: You think I got a shot at this?
Adam: You're Johnny Drama. You always got a shot.

Adam: What the fuck was that?
Ari: My wife lost a contact, Davies. Why don't you pop out and help us? Maybe I'll give you a little curbing when you're on your knees.
Adam: You'd love to see me with something hard in my mouth, huh, Ari?

Ari: Even if I were taking office space, which I am not, you fucked me last year. Do you really think we can work together?
Adam: Come on, Ari. We're all animals. We just go wherever there's the most food.

Adam: Wow. Nice car, Ari.
Ari: Anniversary gift from the wife. Thanks, Davies.
Adam: Oh, that's right. I forgot you married into money. Good for you, Ari. Good for you.
Ari: We only use her money for the small stuff. Someday when you're done sucking on Terrance's tit, you might want to get yourself into a man's car like this.