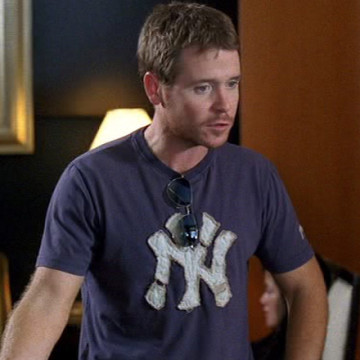 Emily: Have you ever tried Nicorette?
Eric: I did. I tried it but I couldn't follow the instructions.

Turtle: You should call her, Vince. It's destiny. Besides, she has got a great ass.
Eric: Oh yeah, that's a great idea, Turtle. Have her catch a ride out here with the Kevorkian guy from Michigan who wants Vince to kill him.

Turtle: What if I pay my own way?
Eric: Oh yeah? How you gonna do that, you gonna sell a kidney?

Drama: Let me get this straight... she convinces you to get these extravagant accommodations... and then she bails?
Eric: She didn't bail. She got sick. Before the date, unlike your girls who get sick when they arrive.

Turtle: You can go to the mansion in Underoos and still get laid, Vince.
Eric: Yeah and you could go wrapped in bearer bonds and still not get laid, Turtle. Put the fuckin pajamas back.

Drama: Speaking of which, are you going to give me cash or Vince's black card cause there's a couple more things I might need.
Eric: What do you wanna do now, Drama? Do you wanna get your ears pinned back?
Drama: No, I'm gonna need a new set of kitchen knives, dickface. These blades are for shit. You know Vince likes his tomatoes sliced paper-thin.

Ari: Eric. I got the cash you wanted.
Eric: Oh yeah? What'd you dust off your tranny gear and hit Santa Monica Boulevard?

Turtle: 500 grand a day? We should do a hundred of these a year. That's $50 million. Take the other 265 days off.
Drama: That's better than a teacher's schedule.
Vince: What do you think, E? No more movies. No more critics.
Eric: Yeah, why be a movie star when you can be an international spokesperson?