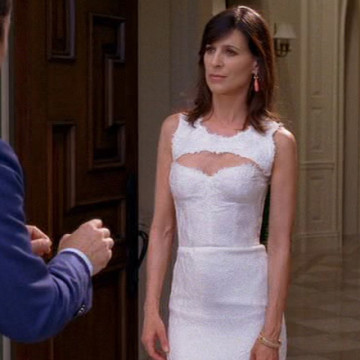 Mrs. Ari: I want three weeks in the south of France with the children.
Ari: Oh my god, baby! Of course you can go.
Mrs. Ari: With you. And if you're not home by 2am, I'm going to be standing at the gate screaming, "Ari Gold, superagent, forgot his Viagra."

Ari: What the fuck is gonna make me leave now?
Mrs. Ari: You could die.
Ari: You'd like that, wouldn't you?
Mrs. Ari: Not until I saw that the life insurance check didn't bounce.

Ari: We should just tell them to go to a hotel. I mean, they can afford it.
Mrs. Ari: What a difference six hours makes. When I said that, you said it's only one night. "Shit, you could do that in a Mexican jail and come out almost as clean as you went in," I believe was the quote.

Ari: Happy anniversary.
Mrs. Ari: I don't... baby, my gift does not compare to that.
Ari: Don't worry. I got myself something to make up for it.

Ari: How would you like to be fuckin a studio head, baby?
Mrs. Ari: Well, Ron Meyer is pretty handsome.

Ari: Baby, we were just having sex.
Mrs. Ari: You were having sex.
Ari: That's what marriage is for, so you can bang out your anger.

Mrs. Ari: Marci, get off the phone! You look like my douche of a husband!