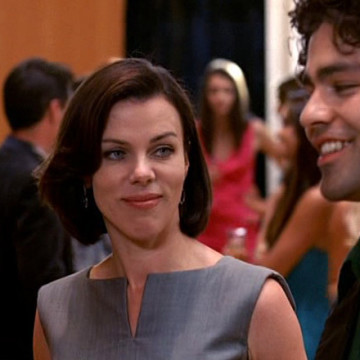 Shauna: Vince is on his way to becoming a major sex symbol. Don't fuck this up. Get him on the screen with someone who's got tits.

Shauna: "Bon Voyage?" Please, it sounds like you're shipping a gay French couple off to sea.

Shauna: What's next?
Christy: Gotta get the Godiva chocolates for Star Jones.
Shauna: Better make room in the fuckin trunk.

Shauna: It says, "Vincent Chase swims into Aquaman." Clever, huh? And they got his picture side-by-side with Jeffrey Katzenberg so it looks even more gorgeous by comparison.

Drama: I'm gonna tell Davies I want a say in who's playing my love interest.
Shauna: Why don't you get Lorenzo Lamas, Drama?

Vince: So you're telling me she'll pass on a James Cameron movie if it's awkward?
Eric: Jesus Christ, Vince. What'd you do to this girl?
Vince: Nothing. Shauna, you remember.
Shauna: I remember you living on the breakup diet of canned tuna and saltines. You dropped 15 pounds. You looked like fuckin Adrien Brody in The Pianist.

Ari: I'm not saying "don't date her." I'm just saying "be discrete." No hand-holding at The Grove. No canoodling on Melrose.
Shauna: No fingerbanging her courtside at the Lakers game.
Ari: What?
Shauna: Fuck you guys. I'm making a point here. No cameras.

Shauna: Eric, unless I spread a false rumor that Mandy has genital warts, there is no way for me to spin this in Vince's favor.
Eric: I can't hear you when you're yelling at me, Shauna. Just go work your magic.
Shauna: I'm a publicist, Eric, not David Blaine.

Drama: Hey, Shauna, how is my lovely publicist doing?
Shauna: I'm not your publicist til you write a check, you cheap fuck. Until then, I'm simply doing Vince a favor.

Shauna: Where's my fucking kid?
Christy: He threw up on me.
Shauna: Relax, Christy. I'm sure he's not the first guy to puke on you.

Shauna: Do we have any appearances that Vince can do?
Christy: Actually, I just got a call from some guy in Bel Air about his daughter's sweet sixteen. Zac Efron was supposed to do it but his appendix exploded.
Shauna: Great! Call him back and tell him we have an actor whose testicles have actually dropped.

Shauna: You're not wearing a tank top and fucking shorts on The View, Drama. Who do you think you are? Richard Simmons?
Turtle: Only gayer.

Drama: When I came into this world I had nothing and now I'm right back to it. I left everything I had up on that stage... except the clothes on my back.
Shauna: Maybe you should've left those, too. It would have been far more interesting.