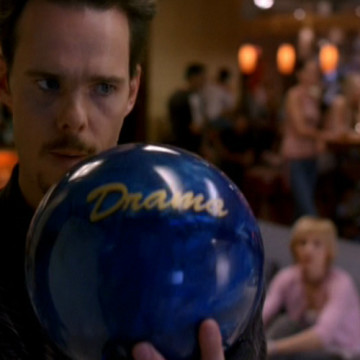 Turtle: You should call her, Vince. It's destiny. Besides, she has got a great ass.
Eric: Oh yeah, that's a great idea, Turtle. Have her catch a ride out here with the Kevorkian guy from Michigan who wants Vince to kill him.

Vince: You know, I haven't been on a real date since high school.
Drama: Yeah, that's because nobody dates in LA, Vince. It's a waste of time.
Turtle: And money.
Drama: LA lives between two and five AM. You take a lap through the talent pool, catch and release.

Ari: I had video sex with an Ecuadorian girl this morning.
Eric: I hope she was 18. Federal offense if not.
Ari: She had big teeth and a sarong. That's all I remember, baby.

Justine: I think I want you to be my first.
Vince: Really?
Justine: Yeah, but you're really gonna have to work for it.
Vince: Work? Come on. I got into this business so I don't have to work.

Ari: No tequila? Tara Reid steal it? Let's get into it, we gotta celebrate!

Ari: You're on fire, baby, we gotta get your next movie. Wanna do Hindenburg? Script's comin in. It's like Titanic on a blimp.

Turtle: Where's Tanya?
Drama: Doing push-ups in the mens bathroom for all I know. I'm done with that girl.