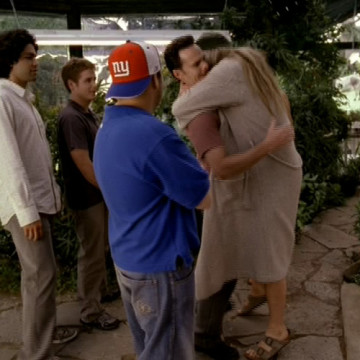 Turtle: Do you guys not see the problem here? Vince said she was staying a couple of nights, all right? A couple's two.
Drama: Except in Utah.

Josh: Yanks are playing the Angels Tuesday. I've got the company box if you wanna roll with. Got the gals from The L Word coming. Trust me, they're only acting.

Drama: Look, she's already got him wearing cloth shoes.
Vince: These are my slippers, idiot.

Drama: Did you see the picture of the swami in the bathroom?
Vince: It's her guru.
Drama: Yea, well I don't like the way he looks at me when I'm pissin.

Turtle: Look if you ever need anything, you know, concert tickets, pedicure, full-body massage...
Christy: How about a stun gun?

Fiona: Come on, there's plenty of protein in mung-beans.
Ari: No, no, I'm talking about real protein. I mean like man protein, you know, from the flesh of slaughtered animals. I wanna have war paint and I want blood dripping. That's what I need.

Fiona: Have you seen a video of a slaughterhouse, Ari?
Vince: Meat is murder.
Ari: Even broccoli screams when you rip it from the ground.

Vince: You know what? With all due respect, I grew up a block from where this script takes place, in a shitty little apartment with five brothers and sisters and a psychotically drunk father. I am this part.
Scott: Yes, but you know that even the truth sometimes seems fake, right?

Eric: What is this stuff? Is it wheat or is it grass?
Vince: Whatever, it's good for you.
Drama: Nah, I don't trust this shit. I lived on this stuff in '93. By the end of the year I was sleeping standing up.