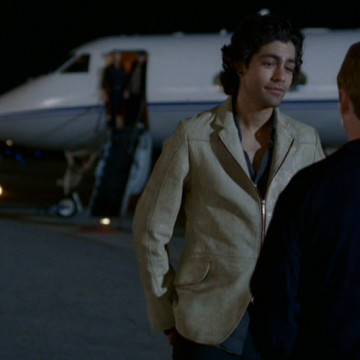 Turtle: So who you gonna invite to the party, E? Emily or Kristen?
Drama: I say invite em both, let em duke it out in a steel cage match. Winner takes all.

Kristen: When you're around him you feel great. But when you're not, you go through withdrawal and you talk about quitting all the time. Classic addiction symptoms.
Eric: So, what? This is all my fault? Is that what you're saying?
Kristen: No. I think you're both fucked up codependents.

Adam: I got you an audition for a guest-starring role in a pilot. A pilot that's all but on the air.
Drama: Yeah? What's it called?
Adam: CSI: Minneapolis. Don Johnson playing the William Peterson playing the David Caruso playing the Gary Sinise role.

Drama: You think I got a shot at this?
Adam: You're Johnny Drama. You always got a shot.

Turtle: What if I pay my own way?
Eric: Oh yeah? How you gonna do that, you gonna sell a kidney?

Shauna: "Bon Voyage?" Please, it sounds like you're shipping a gay French couple off to sea.

Eric: What if they want you to sign something?
Vince: Come on, E. Who forges my signature better than you?

Ari: The point is that he is an insecure fuck like all beautiful been-handed-everything-on-a-silver-platter people. He doesn't trust anyone in this world but you. You've been born into royalty, baby. You know that. Now you've just gotta be thankful and wear the crown.

Eric: I think we should go to dinner before the party. There's some stuff I wanna talk to you about.
Vince: Some stuff? What do you mean "stuff?" Sounds weird.
Eric: Nah, it's nothing weird.
Vince: Listen, E. You're not coming out of the closet, are you? Cause you know I like long legs.

Vince: You're telling me you're willing to fuck up our friendship? If this doesn't work out, there's no turning back. My best friend I can't fire, but my manager... is replaceable.
Eric: Yeah, that's a chance I'm willing to take.
Vince: Yeah, at 5% of me I'd take that chance too.
Eric: 10%. Plus health insurance.