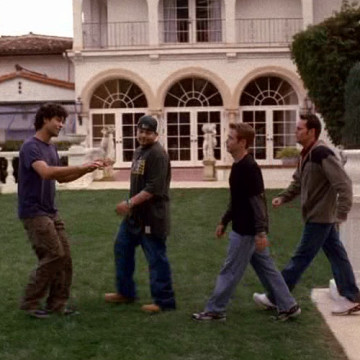 Turtle: You sat at Hugh Hefner's table?
Drama: Yeah. During the Melrose years.
Eric: Don't you mean the Melrose months, Drama?
Drama: Not if you count reruns, dickhead.

Turtle: You can go to the mansion in Underoos and still get laid, Vince.
Eric: Yeah and you could go wrapped in bearer bonds and still not get laid, Turtle. Put the fuckin pajamas back.

Shauna: Lemon water and lettuce, Drama? You disgust me.
Drama: It's all part of my two-day pre-mansion regimen. I gotta look lean for the ladies.
Turtle: Why don't you just sleep in Saran Wrap like you did when you were on the wrestling team?
Drama: Yeah, I sucked weight in a sauna suit. And if you behave yourself, Turtle, I might just put you on my program.

Realtor: Craftsmans are very hot right now, Vince. I just sold one to that actor from Smallville.
Vince: Where's Smallville?

Shauna: What's next?
Christy: Gotta get the Godiva chocolates for Star Jones.
Shauna: Better make room in the fuckin trunk.

Drama: You guys wouldn't go to the mansion without me... right...?
Turtle: Hey, don't worry. We'll bring you back a playmate doggie bag.

Alan: We want you in the Warner family, Vince.
Vince: I'm all about family, John. In fact, after seeing your 200 foot yacht in last month's Robb Report, can I call you "Dad?"

Vince: No way I'm gonna be on a seventy foot screen looking like an underwater Elton John.

Drama: You know, Vince. Wearing a costume can be very liberating as an actor. You remember how much I enjoyed being a Power Ranger.
Turtle: You were a Power Ranger on City Walk, Drama. You were trying to get people to change their long distance plan.
Drama: So? Still liberating.

Vince: Johnny Depp's got the kind of career I want.
Eric: Johnny Depp did Pirates of the Caribbean. And if I'm not mistaken, he wore a swashbuckler costume and carried a sword.
Turtle: Yeah I heard he dresses like that in real life, though.

Eric: You can't afford this house, Vince.
Vince: Can't afford anything we have. Never stopped me before.

Eric: Turtle, you know you forgot to take the price tags off your pajamas?
Turtle: I didn't forget, all right? I'm returning these on Monday.
Vince: Guy's a genius.
Turtle: Besides, what's the use of spending $1200 on PJs if nobody knows it?

Mrs. Ari: I want three weeks in the south of France with the children.
Ari: Oh my god, baby! Of course you can go.
Mrs. Ari: With you. And if you're not home by 2am, I'm going to be standing at the gate screaming, "Ari Gold, superagent, forgot his Viagra."