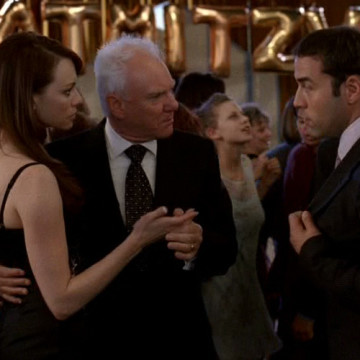 Eric: I mean, how can I trust anything you say anymore?
Vince: How can I trust you? You're the one eavesdropping. I should have Gavin de Becker come sweep the house for bugs.

Turtle: $3,000 suit just to line up some pussy, huh, E?
Drama: It's a good investment. McQuewick's got to be worth $100 million easy. You buying that suit is like buying Microsoft in the '80s. That's if you can get the girl.

Ari: Let's get this party started, huh? DJ Quik. Everybody dance.
Mrs. Ari: What about the blessing and the lighting of the candles?
Ari: What more boring way to kill a party than to get 30 people up here and light a fucking candle?

Mrs. Ari: You are being ridiculous.
Ari: I'm being ridiculous? That's exactly what you said at the Bill and Ted premiere when Terrance said, "I'll take Keanu, you take the other guy."

Mrs. Ari: Ari, you've idolized Terrance since you were twenty years old and you've let him take advantage of you ever since. So stop it now.
Ari: You're right, baby.
Mrs. Ari: Just be a man.
Ari: "Just be a man?" Really? You give me the whole heartfelt pump up speech, then you say, "just go be a man?" Come on.

Terrance: Technically, he is your client. But this is my agency.
Ari: And I'm a fucking partner.
Terrance: Well... I've had more than a few partners. Not all of them have lasted. Enjoy your evening.

Turtle: We know. You're talking to former addicts.
Drama: Weed is a gateway drug, son. One day you're lighting up in full view of a dozen adults at a Bat Mitzvah, the next you're cruising Santa Monica Boulevard offering handjobs for a crack rock.
Kid: Which one of you did that?