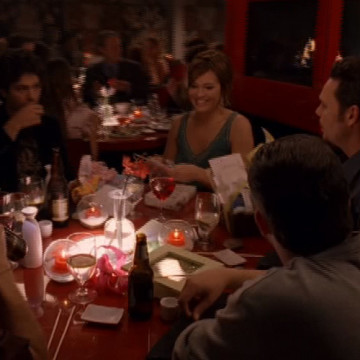 Turtle: Whose whole family is of Sicilian ancestry?
Eric: You're grandmother ran numbers out of a deli, Turtle. You're far from a made man.

Drama: Vince, let's do a Tarantino movie. He can revive me like he did for Travolta.
Turtle: It'd be more like reviving Freddie "Boom Boom" Washington.

Ari: What'd you and Terrance talk about, anyway?
Eric: Oh, he offered me your job. I turned him down cause your office is too small.

Ari: I'm not saying "don't date her." I'm just saying "be discrete." No hand-holding at The Grove. No canoodling on Melrose.
Shauna: No fingerbanging her courtside at the Lakers game.
Ari: What?
Shauna: Fuck you guys. I'm making a point here. No cameras.

Vince: Robert Nitch is Mandy's favorite artist.
Eric: I thought Beyonce was.
Vince: Don't be mean to Mandy just because you're mad at me.

Ari: Lloyd, you were an art history major at Sarah Lawrence college, right?
Lloyd: Yes, I was.
Ari: Then you know how to pull this down off the wall. Grab it and put it down in Vinnie's car. Chop chop.

Sloan: All I can tell you is that in the year I was out of town, Vince slept with almost all of my friends. And he never told any of them he was in love. So maybe he is.
Eric: Yeah, well I don't know what he's lying to me for.
Sloan: Guys lie to their friends and tell them they're not in love. They don't usually lie and tell them they are. That lie they save for the girls.

Ari: It's a jerkoff general. My six-year-old could get that meeting.
Eric: Yeah, your six-year-old probably could have painted this shit too.
Ari: Tarantino is probably holed up in a Vegas penthouse with half a dozen Thai hookers writing his next script which no one has seen! I mean, for all we know, he's probably writing about Wu Tzu Chi, the lesbian empress of the Ming dynasty. You want Vince to play a dictator dyke?
Eric: If it's a good role.

Vince: Well, look what we have here.
Turtle: We were about to start hanging signs on trees.
Drama: Yeah. "Miniature Irish Setter. Answers to the name of E."

Vince: Hopefully this will make up for the last birthday we spent together.
Drama: Unless you ran her dog over, I'm guessing it might.