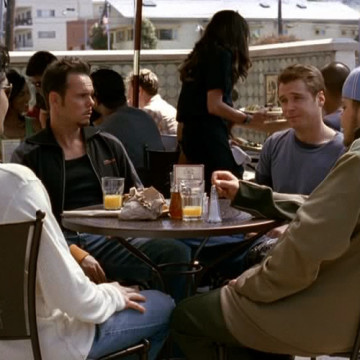 Ari: It is 9:30. Do you know where your only client is?
Eric: What are you, testing out the new emergency asshole system, Ari?

Drama: Nobody takes cabs in LA, Turtle.
Turtle: That's cause no one can figure out what color they are. I mean they got blue ones, green ones, red ones, white ones...
Drama: You know what? Fuck a city where the cabs aren't monochromatic yellow.

Ari: I'll give you one of my famous shoulder massages. You remember those from the old days?
Barbara: I do, Ari. I also remember you threatened to sue me for sexual harassment right before I fired you.
Ari: Didn't we settle out of court?

Drama: I'm telling you, once your car's been stolen, it never runs the same again. It's like a guy sleepin with your girl. He leaves his mark all over it.
Vince: And how does a car know it's been stolen?
Drama: Ask the Buddhists, bro. They believe everything's got a soul. Even a toaster oven.

Barbara: So, Ari, who's going to be running this shindig? You or me?
Ari: You've got the biggest cock in the room, Babs. Why don't you kick it off?
Barbara: Oh, I don't know about that, Ari. We haven't seen Eric's yet.

Vince: No way that's E's. He knows as much about the rap music business as Willie Nelson.

Barbara: Eric, we both know Vince has fucked half the actresses in this town. Mandy, on the other hand, is a good girl.
Eric: You seriously going to sit here and let them badmouth Vince like this?
Ari: I thought that was a compliment.

Turtle: I got a hot song for Queens Boulevard.
Billy: Thanks but no thanks. I'm scoring the whole thing myself with a sitar.

Turtle: You know what my pops used to say?
Drama: "I wish I had a daughter?"

Saigon: That is why y'all here, right? You wanna manage me?
Drama: Not me. I've got my own flourishing career to manage.
Detailer: Yeah? What you do?
Turtle: He just tries to act like he's not retarded.

Terrance: Control's a funny thing, isn't it, Ari? You don't realize how little of it you have until you actually have none of it at all.