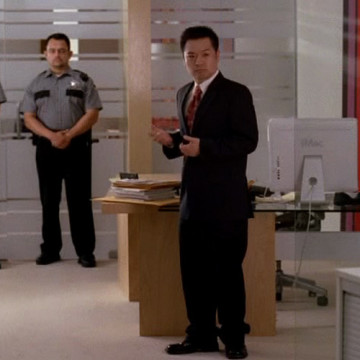 Vince: What are we if we're not family?
Drama: Just four guys who are a little too old to still be living together.
Eric: Yeah, one guy who's way too old.

Eric: You better forget gold and check out something in silver, Drama.
Drama: No, bro. Silver doesn't read on my skin.

Eric: You think I'm buying a watch for your fucking client?
Turtle: No, you're paying for a gift for me. What I choose to do with it after that, that's my business.

Terrance: Let's cut to the chase. I miss this place. I miss the excitement, I miss the action... I'm coming back full time.
Ari: Muhammad Ali came back once too often too, Terrance.

Ari: Lloyd! Pack up all my files! Pile everything you see into a box! Everything! If you see a used condom, an executioner's mask, and a goddamn spike paddle, don't think. Just pack that bitch. Chop suey!

Ari: You're making a very big mistake, Terrance.
Terrance: That's what Arthur Jensen said in 1973. He was the first conspirator that I ever dealt with. Try finding him now, Ari. He's selling auto insurance in Reseda.

Lloyd: Ari, swear to me that you will never again say anything offensive to me about my race or my sexual orientation.
Ari: I can't swear to that, but I promise I will always apologize after.

Ari: Ernesto! How many fucking pesos did I give you for Christmas? Huh, Ernesto? Every Christmas for the past decade. Half of Mexico is eating on my tips that I have given you. Now bring my motherfucking car now, por favor!

Turtle: He cries in front of her, shows her he's sensitive... bang! He moves right in.
Drama: Yeah. His tears will basically act as a lubricant.

Ari: That was a good speech, Lloyd. Yeah. If I was 25 and liked cock, we could be something.