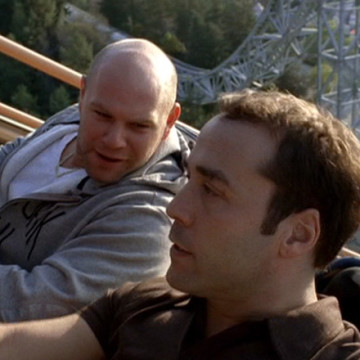 Turtle: This dinner's even better than the one you took us to when you signed Vince.
Ari: E wasn't around for that one, you know? He's making up for lost time... ordering three different types of caviar.
Eric: Until I see your credit card, you're still a dine and dash candidate as far as I'm concerned.

Vince: You know what? I'll go just to see you doing mach 10 in a water flume.
Ari: I don't do thrill rides. Haven't since I rode one of the partner's daughters in the William Morris mailroom in '86.

Vince: E, what are you being a dick for, huh?
Eric: I'm not being a dick. I just don't trust him.
Vince: You don't like that he calls you E. coli?
Eric: It's Ebola, and no, it's got nothing to do with that.

Eric: Who's he got up there, anyway?
Turtle: Don't get nervous but I think it's one of those Aileen Wuornos types he met at an inter-prison mingler.

Escort: So is this really where Aquaman lives?
Dom: Yeah. And the front doors are down the hall. Feel free to kick yourself out.

Drama: That's not necessary, Dom. I do the cooking around here.
Turtle: Giving us food poisoning gives Drama a reason to live.

Ari: He's an actor, honey. And actors are bad. I know this, honey. I work with them all day.
Sarah: Mom used to be an actor.
Ari: And now she's not. And that's why now she is good.

Mrs. Ari: Congratulations. You just won yourself $50,000 in child therapy.
Ari: Hey, in this town, as long as I keep her off an E! True Hollywood Story, I've done my job.

Ari: E, I hope you brought your lifts cause I'd hate to see you sidelined by the ride's height requirement.
Eric: That's funny. I'll be laughing about that one on the ride while you're having a panic attack blowing chunks.
Ari: Not if the genius minds behind Xanax have anything to say about it, you won't.