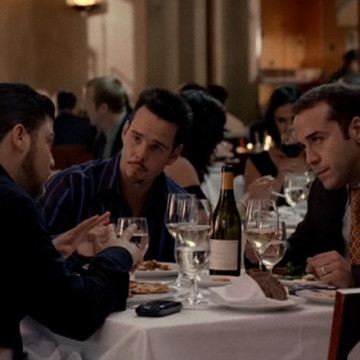 Ari: Where are you? It sounds like you're getting fucked with a jackhammer.

Eric: Ari, Vince really wants to do Medellin. He already started learning Spanish.
Ari: I know, he left fifteen messages on the machine. My wife thinks I'm fucking the gardener.

Eric: So we're going to take all these to the studio?
Vince: Unless you think we're gonna look like schmucks driving the same car.
Drama: We'd be schmucks in Jettas. In Aston Martins we look good and independently wealthy.

Turtle: No, I need a sitdown.
Vince: He needs a sitdown.
Ari: You know what? I'm gonna be at Equinox, I'll be at the juice bar. Triple-berry dreamsicles on me, okay?

Turtle: Okay, here we go... I've got a two-phase plan. First, 500 CDs pressed and sitting in the trunk of my car.
Ari: So what, you want me to sell them with you on the promenade?

Ari: Jimmy Whitaker is a spoiled prick. You want to hire Max Ballard. He's Dakota Fanning with a dick.

Eric: You shoot the first half now, before Aquaman 2, while he's skinny. You shoot the second half after he wraps when Vince piles on the pasta.
Vince: Like De Niro in Raging Bull.
Paul: Like Clooney in Syriana.
Drama: Or Johnny Chase in The Comish when I played that bulimic pedophile. Did you see that one, Paul?