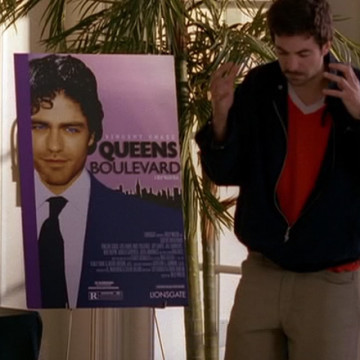 Eric: What's going on out there, Ari? You having a telethon?
Ari: Yeah, E. Raising cash for the subordinates of movie stars who can't fend for themselves.

Billy: I'm not gonna let those douchebags Aquaman-ify my movie!
Eric: Billy, where are you? We're going to come see you.
Billy: Meet me at my girl's. I gotta go home and tell her I lost the rent money again.

Barbara: We need to have lunch, Ari. The word is out and it's spreading.
Ari: You mean that shit about you getting lipo? Don't worry about that. From what I hear, Dr. Dessler's like a fucking Picasso with that knife.

Drama: You know, Eddie Burns offered me Brothers McMullen. True story. But I took a TV show instead.
Turtle: Is that when you did your full-frontal Red Shoe Diary?
Drama: No, that's when I did my three episode arc on 90210, sexually harassing Tori Spelling.
Turtle: Nice choice.

Vince: Walsh, what is this, your house?
Billy: No, I'm house sitting for my girl's folks. They made a fortune off ginseng and kombucha drinks. They won't let her see a dime of it though. I'm just praying they drop dead before they raise the estate tax.

Lloyd: Who's going to man the phones?
Ari: Fuck the phones, Lloyd! Unless Carmen Electra calls for an emergency titty fuck, don't answer!

Studio Rep: And with this version we will attract a much broader audience. Isn't that what making movies is all about?
Eric: Well, actually it's an art film. The only way you know it's good is if most people hate it.