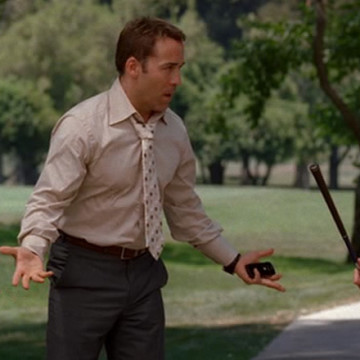 Amanda: I need an answer on Glimpses and you do not return my calls.
Eric: We called you back on Friday.
Amanda: You left a message at my office at 10pm. Who'd you think was going to answer, the janitor?

Turtle: It's not like the Yanks are in town.
Drama: Or the Mets.
Eric: The Mets? Who cares about the Mets?

Dr. Marcus: I don't think that Vincent Chase should determine where you go and don't go in this town.
Ari: He doesn't determine -
Mrs. Ari: He's been in a funk since he got fired. And then, of course, there was the birthday party incident...
Ari: Everybody stop. I didn't go to the Lakers game cause they were playing the fucking Bobcats. And I came here today because I thought this was a session on how my wife could learn to communicate - how to answer a question without a question - Basic Humanity 101. Which, I thought, given your wall of fucking diplomas, you could easily fix. Or if you couldn't, you could give her a pill that could either fix it or make her a mute. But now to turn around and gang up on me - I have work to do! I have hundreds of clients to deal with! And just so we're clear, I don't care about any of them. They're all just a number, like wife number one and therapist number seven. Good day!

Ari: That's right. You had your little eye procedure today.
Rob: It's actually not a procedure, it's a real surgery. They actually had to cut into my eyeball and then they lift the cornea.
Ari: It's still elective though, right?

Turtle: I didn't get it at all. I mean, why doesn't Vince bang the girl?
Eric: Cause that's the way it was back then.
Turtle: What are you saying, E? Guys didn't get pussy back in the day?
Drama: Don't be retarded, Turtle, of course they did. Or none of us would be here.

Eric: You were so excited.
Vince: It's cause Amanda was excited. She got me excited. She knows how to sell.
Drama: I'd buy diseased fish from her.
Turtle: I'd eat it.

Drama: That is freaking gorgeous! You think I could get on the celebrity tour?
Turtle: If you were a celebrity.

Ari: I couldn't fire someone today. Firing people was one of my favorite things. It's a perk of my job. I couldn't do it. All because this little fuck gave me some song and dance about his wife leaving him.

Ari: Last week all I had to do was let my assistant perform just one more of the many gay acts that he's performed in his life, it would have made me millions of dollars, and I couldn't do that, either.
Dr. Marcus: So you felt protective over someone else?
Ari: Yeah! And it made me sick!

Ari: You shitty dime store therapist! A man's life is on the line here and all you give a fuck about is beating some stupid club record? That will do what for you? Give you five minutes of pleasure while you fuck your underpaid emasculated husband tonight? How the fuck does he afford this place, anyway? Isn't he a guidance counselor at a high school?

Amanda: What's changed besides the appearance of Ari's receding hairline?

Drama: Are you tellin me when she came out this morning mouth blazin, spit flyin, power suit waving that you didn't get a little excited?
Vince: I got a little excited.
Drama: That's nothing to be ashamed of, Vince. All men love women filled with rage.

Amanda: I hate sexual tension, Vince. It always leads to confusion.
Vince: I couldn't agree more.
Amanda: Good. Then let's get it out of the way by fucking each other's brains out and never talking about it again so we can move on to a very successful and professional agent-client relationship.