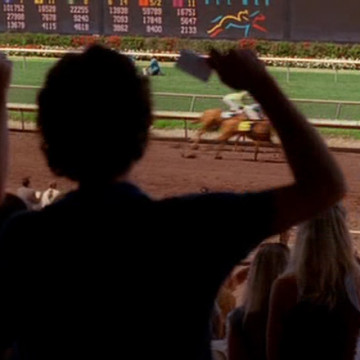 Vince: I don't know what it's called.
Eric: That's what it's called. It's called a Cartier Love Bracelet.
Turtle: Does this mean that Vince and Amanda are in love?
Vince: No, it means E knows way too much about jewelry.

Drama: We got a sure thing running in the fifth.
Eric: How do you know, Drama?
Drama: Because I know the pony's granddad. And in horse racing, as in life, a good lineage is the surest way to predict a fine performance.
Turtle: Well how come you're from Vince's lineage and all your performances suck?

Drama: Come on! Kingmaker! He came home for me 10 to 1 at Belmont. That's how I bought the Lincoln. Any of this ringing a bell?
Vince: Not really.
Turtle: I thought that you bought your Lincoln from selling weed at the high school.
Eric: That rings a bell.

Mrs. Ari: Sarah, we fast and make other important sacrifices today to show God we're sorry for our sins.
Sarah: But Daddy ate a breath mint.
Mrs. Ari: What?!
Ari: Now you're gonna have to atone for ratting Daddy out, baby. What, you think God wants my breath to smell?

Eric: She doesn't want to go to temple.
Vince: Let me talk to her.
Turtle: She'll go to temple for Vince.
Drama: She'd go to the Gaza Strip in a yarmulke for Vince.

Drama: There he is! We love you, King!
Turtle: He looks out of shape.
Drama: What are you talking about? Look at those glutes. Fucking beautiful.
Eric: You wanna win money on him or fuck him, Drama?

Eric: Your giggling's making me a little nauseous.
Vince: Giggling? There was no giggling. I laughed.
Turtle: Sounded like a giggle to me.
Drama: If your voice goes up in pitch past a high C, it's a giggle. You hit a D there, bro.

Drama: Ah, the downside of fucking your representatives.
Vince: You agree with these guys, too, Johnny?
Drama: Don't get me wrong. Amanda's a hot-looking broad, but she ain't never had a piece like you, bro.
Turtle: You think Vince is a "piece," Drama?

Drama: $5,000 to board a horse and that doesn't even include food. I am so pissed right now.
Eric: You think you're pissed just wait til the gardener sees he has to clean up more than just Arnold's shit on Tuesday.