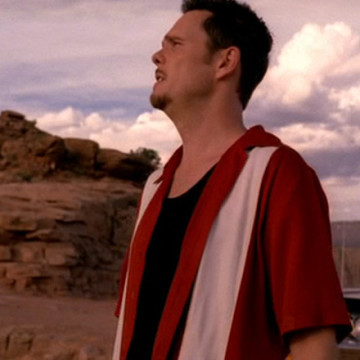 Turtle: I'm hungry.
Vince: Me too.
Turtle: Should I try to make us something?
Vince: Not that hungry.

Drama: I don't know. I felt good about the show and all, but now that it's actually airing...
Eric: The show is great, Drama. Just relax.
Turtle: It really is, Drama. And this is coming from someone who's never liked your work.

Ari: Sometimes things just aren't meant to be. Sometimes no matter how bad you want something, you gotta let it go. Senior year: I was obsessed with Katie Sherman. Most insane tits. Anyway, the moment I found out that she gave half the football team crabs, I was done. Never thought about it again.
Eric: You saying Medellin has crabs, Ari?
Ari: Medellin has crabs, gonorrhea, syphilis... it is an untreatable supergerm. This project has been plagued since day one. Let it go.

Ari: Wow.
Vince: What?
Ari: I think I just saw the next 50 years of your life. Actor, activist, politician, president... you were passionate, eloquent, succinct, and intelligent in a way I've never seen before. It was like when a father sees his baby boy become a man for the first time. Bravo.
Vince: Ari, that's sweet. Stop kissing my ass and get it done.

Ari: Joe, what are you doing to me?
Joe: I'm not doing anything to you, Ari. I'm just doing good business.
Ari: That's weird because it feels like you're taking a steel catheter and shoving it right up my cock.

Ari: I am so good, not only did I get you your passion project, but I got you your next big hit, too.
Vince: Matterhorn?
Ari: Matterhorn. Boom! Am I a fucking magician or what?
Eric: Yeah. You made a shitty project reappear.

Eric: The reviewer says he took one star off his review the minute you came on.
Drama: How many stars are left?
Eric: None.
Drama: That's great. I got zero stars in my hometown paper.

Turtle: How's this look?
Eric: What's that?
Turtle: Phone number to the girl of my dreams. I can't wait til you guys meet her, she's amazing. She's like me with tits.
Eric: Oh yeah, that sounds amazing.