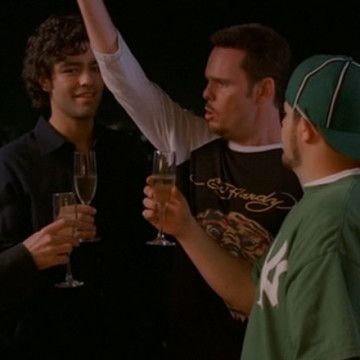 Turtle: Someone offered you money to fuck, Drama?
Drama: Yeah, that's right, hater. Viking Quest convention '99. A guy from Orlando offered me fifty bucks to photograph me banging his wife while wearing my Tarvold costume.
Eric: Jesus Christ, what'd you say?
Drama: I said no, what the fuck do you think I said? But I did let her blow me in the car when hubby hit the roulette table.

Drama: Never move in with a girl for financial reasons. Never, never, never. Cause once you're in, you never get out.
Eric: I'm not moving in with her, Drama, I'm just staying there until we leave to shoot the movie.
Turtle: Yeah and that girl from Silence of the Lambs is "just staying" in that well.

Drama: Did you see the look on Sloan's face when E had to cancel their "special lunch?"
Turtle: It was just like the look on my face when he told us he was going to be living with her.

Eric: I know that three studios budgeted it and all of em were over $65 million. I mean, even if they inflated it 20%, we're still not even close.
Ari: You make concessions.
Eric: Like what? Shoot in Malibu for Colombia?
Ari: They shot King Kong in New Zealand and that monkey climbed up the Empire State Building. If you want this thing, you figure out a way to make it work!

Drama: They allow pets if you want me to take Arnold.
Turtle: I would not subject Arnold to that shithole.
Drama: You'd rather board him?
Turtle: I'd rather put him out on the streets and let him fend for himself.

Drama: Hey, Shauna, how is my lovely publicist doing?
Shauna: I'm not your publicist til you write a check, you cheap fuck. Until then, I'm simply doing Vince a favor.

Drama: Fucking Beverly Hills. Even the water's pricier here.
Turtle: I don't know. Looks pretty nice to me, especially compared to that dump we just left.
Drama: Don't be fooled by the exterior, Turtle. This place will be half the size at twice the price, just so you can tell people you got the same ZIP as Shannen Doherty.

Eric: I have dinner plans already.
Ari: No, what you have is a very nervous money man, E.
Eric: Well I told him I'd handle it, so why's he calling you?
Ari: He's calling me because he sort of sees me as a second father and he sort of sees you as a guy who has no idea how to produce.

Sloan: If you go and shoot this movie for six months, I want to know what me and all these boxes are waiting for.
Eric: Can I be honest? I've been so caught up trying to put this movie together, I haven't really thought about it.
Sloan: Okay, I understand. Can I be honest? You really need to.

Billy: I need 30. I can't do it for a dollar less than that.
Nicky: I don't have any more money for you, big guy.
Billy: Oh, come on, you probably got the cash out in your car, trust fund baby. Now just pony it up.
Nicky: Stop calling me trust fund baby, you fucking orangutan.

Billy: Making a movie is like going to war. And as we've all learned, you don't go to war underprepared and underfinanced.