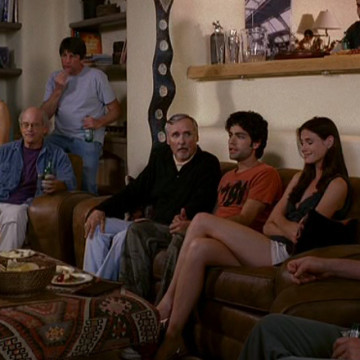 Drama: We have almost the same blood. How did my life go so wrong?
Turtle: Yeah, genetic mutations can be so cruel.

Harvey: I've been following Medellin for a long time and I've heard some not-such-great things from inside sources.
Eric: Well, I don't know what inside sources you have, Harvey, but -
Harvey: You'll never know. That's why they call them inside sources.

Drama: You can't bail on me. I need you here. The only way I'm going to get Donna alone is if you keep Marjorie busy.
Turtle: Get her a deck of cards and some friends to play Mahjong with cause I'm gone.
Drama: Come on, Turtle. 16 years I've been dying to bang this broad. Take one for the team like I did for you that time you set me up with the girl with the clubfoot.
Turtle: Hey, at least that girl was a nine from the ankles up.

Vince: I kinda went in on a bet with Dennis Hopper on Manchester United and we're down.
Marvin: Are you out of your mind, Vince? What do you know about soccer? Get the fuck out of there.
Vince: I already placed the bet, Marvin. I can't just walk out.
Marvin: Bullshit! You put one foot in front of the other and move em.

Eric: Ari, there's genius in this movie but Walsh won't change a fucking thing. I've got to get rid of him.
Ari: Rid of him? That's your boy. You gave him final cut even though I begged you not to. Now you're going to have to live with it. Or kill him... actually, that's a good idea. Why don't you kill him then kill yourself? Could you imagine the outpouring of love and sympathy when Vince loses both of you? I could have him back on top in three months. You owe him that much, E.

Drama: Rumor had it your girl gave the best rim job in LA. Trust me, play your cards right and by 4:00 you'll be sitting on her face like a bidet.

Drama: You got gum?
Turtle: Gum ain't gonna help what you got. You need a stomach specialist.

Turtle: I'd give my nuts to be that guy for one day.
Drama: Well, if you had no nuts, what would be the use? Or would you then be hoping that you'd have Vince's nuts?

Drama: God has already rewarded me for my good deeds.
Turtle: What'd he do, un-recede your hairline?