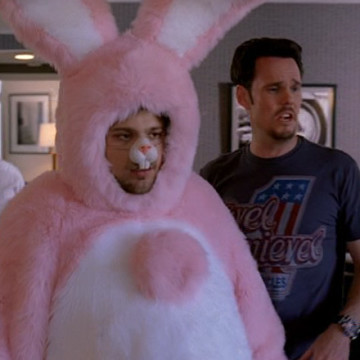 Turtle: It's bad enough I gotta wear this thing but who knows what she's gonna to be wearing?
Drama: Who cares if she's dressed like Godzilla? Close your eyes. Like you used to do when you banged that ugly chick Judy Lipnick in high school.
Turtle: You thought Judy was ugly?
Drama: Is that debatable?

Drama: To show my appreciation for your predictability, E, I'm gonna take some of my winnings and buy you a nice gift certificate to a farm that'll help you grow some balls.

Drama: Don't let them get in your head, Turtle. Furries are people, too, and all people need to get laid. Except for that whack job who only needs a good book, a cup of tea, and a nice, long hug.
Eric: You're helping Bugs Bunny string his dick through a hole and I'm a whack job?

Ari: You got to be kidding me.
Mrs. Ari: It's playtime, Ari. This is what kids do when they play.
Ari: This is what inmates do when they're gonna overtake the guards. I mean, is there even a teacher here or did they lose them to cutbacks?

Turtle: How am I supposed to get laid before the end of the day?
Drama: Relax, Turtle. Old Johnny Boy is going to take you to a place where even a one-eye leper could get laid.
Turtle: Where's that?
Drama: Craigslist.

Eric: I'm not searching out a girl just to fuck her.
Drama: Why not?
Eric: Cause it's mean!
Drama: No, no, no. Mean is when I made Jess Mancini ride her bike home after I ass fucked her.

Drama: Don't be mad, E. It's not our fault you were born without the sport fucking gene.

Drama: Why do you got to look at every girl as a potential relationship?
Eric: Cause I don't want to spend my twilight years alone like you, Drama.

Drama: That's what I call service with a smile.
Turtle: More like a smile I'd like to service.