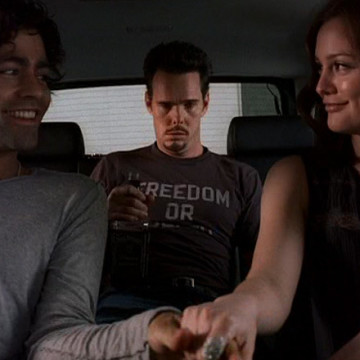 Vince: Wait for what?
Ari: For the stench from Medellin to disappear.
Vince: How long is that going to take?
Ari: How long did it take for the air to clear from fucking Chernobyl?

Ari: Listen, this is what I do. Let me be heard this time. I swear to God, you will come back stronger than ever. Like Lance Armstrong... but with two balls.

Drama: You know, there are other things an actor can do besides wait around for his agent.
Eric: Like what, Drama? Somebody's got to hire him to act.
Turtle: Nobody hired Drama when he was going those scenes on 3rd Street promenade.
Drama: I didn't do scenes on the promenade, jerkoff. Santa Monica pier once, and I got paid for that.

Mark: Don't worry about Vinnie, though, Ari. It's all good. I'm makin so much money that you're gonna be all right, buddy.

Vince: How do you know she's not a virgin anymore, Turtle?
Turtle: It's been all over the papers. Why do you think her last few albums haven't sold?

Drama: It's almost 10:00 in France. I'm supposed to be home so I can tuck her in on the computer. If not, she's going to freak.
Vince: Johnny, why do you want to be in a relationship with someone that's crazy, huh?
Drama: Obsession is a huge turnon to me, bro.

Eric: I want to sell this script. I need an agent to help me do that.
Ari: Try the yellow pages.
Eric: Oh, come on, Ari. I'm calling you as a friend, all right? I need your help. It's a really good script. Can you help me?
Ari: Yes I can, E. Lloyd! Get the number for UCLA extension so Eric can take a course to finally learn how the movie business works.

Turtle: So, with all that dancing, can you do any crazy shit? You know, like put your leg behind your head?
Brooke: I told you I have a boyfriend.
Turtle: You did, but you also said you lie to him. So... maybe you could tell him that we didn't fuck today.

Vince: I mean, was I really that awful?
Ari: Straight up, Vinnie, the movie was awful. And yes, you were awful in it. But you know what? One bad movie can be overcome. Look at Colin Farrell! He's overcome dozens of em because the perception of him is, he's a movie star.
Vince: And what's the perception of me?
Ari: That you don't give a fuck. You refuse to play the game and you refuse to be a part of the process. Look, the great ones, even if they don't care, they pretend they do.

Vince: You don't believe I'm a good actor.
Ari: It remains to be seen. But Vin, I'm starting to believe that you're a movie star again. And you know what? This town loves a comeback. And since Britney fucked hers up, it's all you!