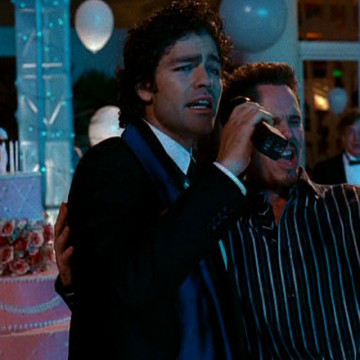 Drama: Jacqueline was just another hozy who tore my heart out of my chest and handed it to me. So laugh at me. Whatever.
Eric: I'm not laughing, Drama, I'm just curious what a hozy is.
Drama: It's a ho and a floozy, E, and as it turns out, Jacqueline was both.

Ari: Happy anniversary.
Mrs. Ari: I don't... baby, my gift does not compare to that.
Ari: Don't worry. I got myself something to make up for it.

Turtle: Should I just get an appetizer?
Marvin: You should go on a hunger strike.

Drama: Maybe that's why I'm alone.
Marvin: Maybe it's because you're fuckin ugly.

Adam: Wow. Nice car, Ari.
Ari: Anniversary gift from the wife. Thanks, Davies.
Adam: Oh, that's right. I forgot you married into money. Good for you, Ari. Good for you.
Ari: We only use her money for the small stuff. Someday when you're done sucking on Terrance's tit, you might want to get yourself into a man's car like this.

Shauna: Do we have any appearances that Vince can do?
Christy: Actually, I just got a call from some guy in Bel Air about his daughter's sweet sixteen. Zac Efron was supposed to do it but his appendix exploded.
Shauna: Great! Call him back and tell him we have an actor whose testicles have actually dropped.

Lloyd: That is really disgusting, Ari.
Ari: No. Really disgusting is going to be the American Psycho-style dismemberment I'm going to perform on you if you don't do that right fucking now.

Adam: Hope you're not calling me for a release on your hard on, Ari.
Ari: I'd call your mother for that, Davies.

Turtle: Maybe we should just eBay off everything we own.
Eric: We don't own that much. Most of it's leased.
Turtle: Auction that shit off anyway. It'll be somebody else's problem.

Ari: It's like the great philosopher Sun Tzu said: "when you're done fucking your enemies, fuck em some more."