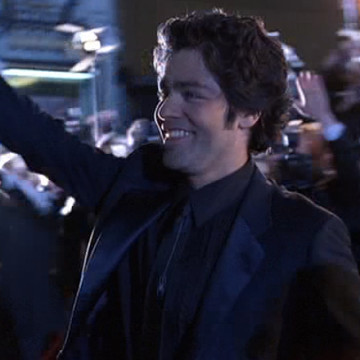 Turtle: His ugliness is oddly fascinating. Especially in Blu-ray. It pisses me off.
Drama: Pisses you off? I'm the one who's so good looking that I couldn't even get an audition.

Drama: Are you kidding? She loves me. You shoulda seen her eyes bulge when the tailor was measuring my inseam.
Vince: Why don't you invite her?
Drama: Maybe.
Turtle: Her or your hand. Tough decision.

Ari: Why do I have to fight with you on this? Having a couple I enjoy will benefit both you and me.
Mrs. Ari: Really? How so?
Ari: Imagine I could spend the proper amount of time with you in the most focused and best mood possible without us pretending we have so much to say to each other.

Ari: You'll have to excuse my abruptness, but this is a win-win situation and I don't want to waste your time with small talk.
Lizzie: That's what I'm here for.

Ari: You have been given a once-in-a-lifetime opportunity to take your lifestyle and your career to the next level. You throw it away on some 22-year-old and you're gonna be left with nothing but herpes.

Ari: You're being a little obsessive, baby. You might want to tone it down a bit.
Mrs. Ari: Okay, freak. I thought you wanted us to be friends?
Ari: Friends, not Siamese ass buddies.

Ari: I know you didn't have the temptation at your last job. That got put in front of you. But at the end of the day, she is just another young girl who's trying to make a name for herself and you're just another old fuck who's gonna have to take a pill to keep up with her.

Eric: Do you think it'd be weird if I thought about Sloan?
Vince: Yes.
Lisa: Hell yeah.
Drama: Nah... I think about her all the time when I'm doing it.