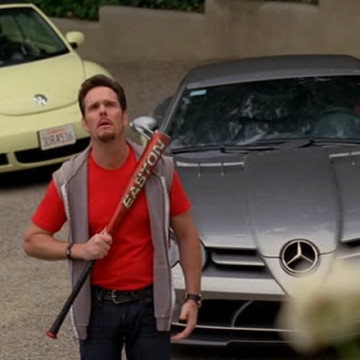 Ari: Please don't tell me you're the one that picked up the stray Lizzie from the harsh gutter of life.
Amanda: I couldn't believe someone who's always had such an eye for talent was willing to let her go.
Ari: I think your eye has grown cataracts, because as you see by the day's events, anyone she wants or has, be it a sitcom actor or a circus freak, I'm going after.

Sasha: I always wanted to fuck the Hulk when I was younger. Is that weird?
Vince: A little. What about Aquaman? You want to fuck him?
Sasha: I liked the sequel better.

Eric: He loves the script and he would do it with you, but he and Bob are best friends, so what's he supposed to do?
Drama: It's not called show friends, it's called show business!

Tyson: I want to do the black Brady Bunch. I'm trying to rehab my image. I want to dispense some of this worldly wisdom that I've picked up on my journey in life.
Ari: And if Bobby doesn't listen to you, you bite his ear off.

Bob: I called you four times this morning and you ignored me.
Eric: I just walked in the door, Bob. You were going to be my first call.
Bob: You think if I call you four times it could maybe be something important? I don't call anybody four times in a row unless I'm trying to fuck them.

Vince: Who the fuck are you?
Sasha: Just a cool chick who likes art and sex.

Ari: Baby, we were just having sex.
Mrs. Ari: You were having sex.
Ari: That's what marriage is for, so you can bang out your anger.

Drama: You an ass virgin, E?
Eric: Yeah, Drama. Unlike you, my ass remains untouched.

Turtle: I've never done the ass.
Scotty: Really? Oh, you should.
Turtle: Why? Is it that great?
Drama: Are you kidding? Vagina's my third favorite hole, bro.