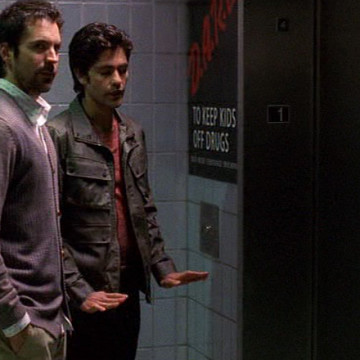 Mrs. Ari: What, you think that Bobby wouldn't tell me that you were there on a date?
Ari: Well, I guess the bro code's out the window when you're fucking someone's wife.

Ari: Bobby, why don't you go back to hiding in your kitchen before I shove a shiitake mushroom up your ass?

Scotty: Says here weed can stay in your system for up to 90 days and sometimes as little as five days.
Turtle: Depending on what?
Scotty: Every person's different.
Drama: I can naturally secrete any substance from my body in 36 hours or less.

Vince: Give me a second. I'm trying to figure out how we can have a conversation without getting into a fight.
Eric: What conversation? Why would we have a fight?
Vince: Because you like to tell me what I've done wrong. You don't like to fix things.

Drama: Guy's got a weak constitution. If he has to relive the carnage, who knows?
Turtle: He's right. I might throw up.
Scotty: Hold on. I thought you guys were like... from the hood.
Drama: His mother and auntie coddled him.

Drama: You're not gonna separate them, right?
Officer: Why would I?
Scotty: Don't mind him. He's seen way too many episodes of Law & Order.
Drama: Been on more than I've seen, actually.

Scotty: What do brains look like?
Turtle: They're gross. Like mashed up spaghetti and meatballs.
Drama: They used kosher egg noodles and cottage cheese when I got shot in the head in New York Undercover.