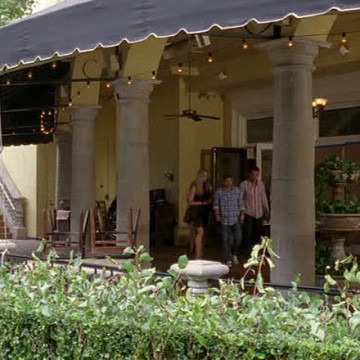 Dana: Would this be the script you're referring to?
Ari: What are you, going through my stuff now?
Dana: I see a script, I read it. Occupational hazard.

Drama: Look. I know that a woman of your stature may have preconceived notions about a guy like Vince, but you should know, especially after interviewing him, he's not just some actor. He's smart. Maybe not John Hopkins kind of smart, but he's smart. More importantly, he's a friend and a brother, and the best I know of both.
Sophia: It's very sweet of you to look out for him.
Drama: Well, that's all he does for me, so I owe him.

Ari: I want every available option on the table for how to get this film made by the end of the day. Whoever succeeds will forever be my family member. Whoever doesn't will be cleaning tanning beds in fuckin Rancho Cucamonga.

Assistant: Ari, he's in a meeting.
Ari: Listen, if he would have called me back, we could have avoided me interrupting it.

Turtle: I don't know what to say.
Drama: Say "thank you," you dumb fuck.