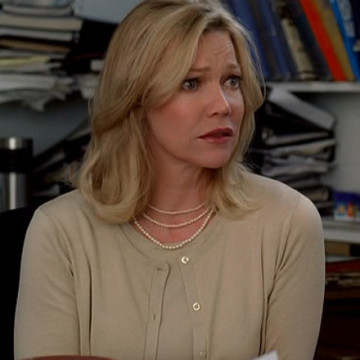 Stacey Travis acts as Andrew Preston’s assistant at the Briar Country Day School during season four’s second episode. Her character visits with Mr. and Mrs. Gold around the episode’s nine-minute mark and advises them to seek other school options for their son, who would have been admitted the following year. Her passive-aggressive demeanor during the meeting sends Mrs. Ari into a cursing fit outside the school during the episode’s next scene. Stacey also played the part of a receptionist in Fun with Dick and Jane and the mother of Amanda Bynes’ character in 2010’s Easy A.