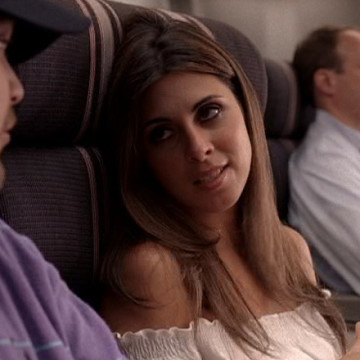 Jamie-Lynn Sigler, who played the part of Meadow Soprano in HBO’s The Sopranos, has a recurring role in seasons six and seven of Entourage and appears as herself in both of them. She is introduced in S05E08, First Class Jerk, where she meets Turtle on a plane and jerks him off during the flight. The two begin dating shortly thereafter but their relationship comes to an end when Jamie takes an acting job in New Zealand. Jamie-Lynn and Jerry (Turtle) actually dated in real life for a few months after working together on the set of Entourage.